Tune in this evening on facebook to see the St. George Quintet performing the “Bullet” by Onslow in the chamber music hall of Concertgebouw Bruges.

The St. George Quintet is named after the composer George Onslow, the godfather of the string quintet. Onslow applies his mastery to one of the most remarkable string quintets ever written – a description of an accident that nearly took his life.

Onslow was born in France in 1784 to a father banished from England because of a homosexual scandal. Onslow spent much of his youth in London receiving the education of a gentleman, and became a capable cellist. After two years of travel in Germany and Austria he began composing, specialising in string quintets for two violins, viola, and two cellos.

On the night of one of Onslow’s works was to be premiered the second cellist didn’t show up. The legendary bassist Domenico Dragonetti happened to be in the audience that night and he sightread the 2nd cello part on double bass. Onslow was so taken with the sound of the bassist that he went back and rescored all his quintets to include the bass.

The quintet that most fascinated his contemporaries describes an accident that nearly ended Onslow’s composing and his life.

In 1829 Onslow and some companions were hunting a long-elusive wild boar, but – ever the composer – Onslow brought along a book of music paper just in case inspiration came during the hunt.  Book in hand, he took up an assigned position and waited for his fellow hunters to drive the boar his way. After a while, the quiet woods roused Onslow’s musical imagination and, forgetting his friends, he wandered deeper into the woods, found a stump, and sat down to work on his latest quintet.

A shot rang out and Onslow fell bleeding to the ground.

A bullet had cut through his ear and lodged in his neck. His recovery was slow, painful, and partial. He roused himself by continuing his work on the quintet that had distracted him in the woods, only now it became a recollection of the accident. To the second movement minuet he gave the title “Suffering, Fever, and Delirium.” The next movement he called “Convalescence.” And the finale became known as “Recovery.”

The bullet in his neck was never removed and he eventually went deaf in the affected ear, but despite the high cost of his “Bullet Quintet,” George Onslow said often that he would not have wanted to miss the opportunity to write it.

The event is made possible with the financial support of the Flemish Government and logistic support by Concertgebouw Bruges & Beeldenstorm Anderlecht.

The soundtrack album of Invisible – Belgian television serie  – composed by Eloi Ragot got released this week on digital platforms. The St. George Quintet had the pleasure to record some parts of the score.

Click here to chose your digital platform to listen to the soundtrack of Invisible: https://awal.ffm.to/invisiblealbum

The series is now being broadcasted in Belgium on Sunday evenings on RTBF: https://www.rtbf.be/emission/invisible

The actual album is very fine indeed, presenting readings that shine with understanding and appreciation of the music’s folk influences, while not for a second losing sight of the quintet’s personal identity as polished classical musicians. Melodies sing with lyrical naturalness. Blending is superb – the overall balance of tones and parts, but also the way one phrase grows into the next, and one movement drops into the following one. Always they’re moving as one. Perhaps the highlight is the Suite for Strings, where the impression of cohesion and developing arch of thought runs effortlessly from first movement to fifth. Its Adagio is exquisite.

Read the full review in the May 2020 issue, or click here to be redirected to the review on the website of the Strad. 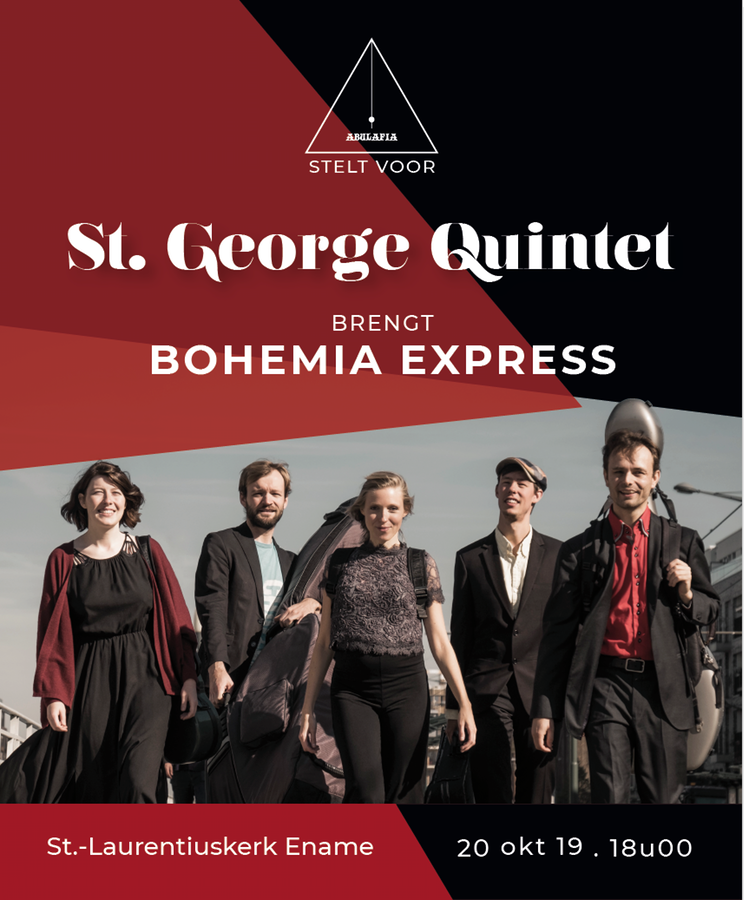 The album Bohemia Express by the St. George Quintet received a complimentary review in Gramophone, written by by Richard Bratby.

‘The St George Quintet are a smart, musicianly team with a clean ensemble sound and a deft, springy rhythmic sense. There’s a Beethoven-like energy to the scherzos in both the main works here…’

‘The guilelessness with which the cello and bass feel their way through the opening bars of Janáček’s fifth-movement Adagio made me smile.’

‘… this is an engaging and enjoyable disc.’

‘… a performance of Suk’s St Wenceslas Meditation in which the ensemble’s blend of tension, deliberation and expressive understatement seems to find exactly the right balance of tragedy and pride.’

Read the full review in the August 2019 issue of Gramophone or online: click here

In the spring, SGQ violinist Kaja Nowak and cellist Wouter Vercruysse gave an interview to Tim De Backer from Klassiek Centraal. The three had a great time talking about the quintet, its newest Bohemia Express CD album, music, and life!

Here’s the introduction to the interview, written by Tim:

Mother why do we play?

On the journey of life people ask themselves the most existential of questions. For musicians, perhaps the most fundamental question is plain, but not so simple: why do we make music? With a fair bit of hindsight and just a pinch of Hineininterpretierung, one could say that the St. George Quintet was created to find and give an answer to this calling. After digging into the repertoire of some British legends and traveling through distant, Bohemian lands, the Belgian ensemble replies as it sees fit. “One of the reasons why I play music is to develop my powers as a human being”, says he. In close harmony, she sounds thus: “By devoting myself to art, I hope I can grow and other people can grow as well …”

On MusicWeb International, the CD Bohemia Express was very well received by Colin Clarke: ‘A most rewarding disc’.

‘What is impressive about this performance is the way the St. George Quintet treat the piece as integral within itself, handling it with the utmost care; it is Janáček’s own voice they honour.’

‘In catalogue terms, the St. George Ensemble comes up against fierce opposition (Prazák, Škampa and Panocha Quartets to name but two region-specific ones) but manage to hold their own, not least because of their charm, heard in the contrasting sections of the Scherzo, where the outer sections have much dance-like vim to them. The slow movement, a Poco Andante, flows nicely here, in its latter stages punching well above its weight; of particular beauty is the way the St George ensemble phrases the descending, sighing phrases.’

‘Diede Verpoest’s viola very moving in its solo line at the opening; the St. George Ensemble takes us on a remarkable emotional journey within a shot space of time. The ensemble’s tuning is impeccable; if pushed, it would be the Suk that I would identify as the disc’s highlight.’

‘Beautifully produced by the experienced Rachel Smith, this is a most rewarding disc.’

Get here your copy of the CD Bohemia Express by the St. George Quintet.